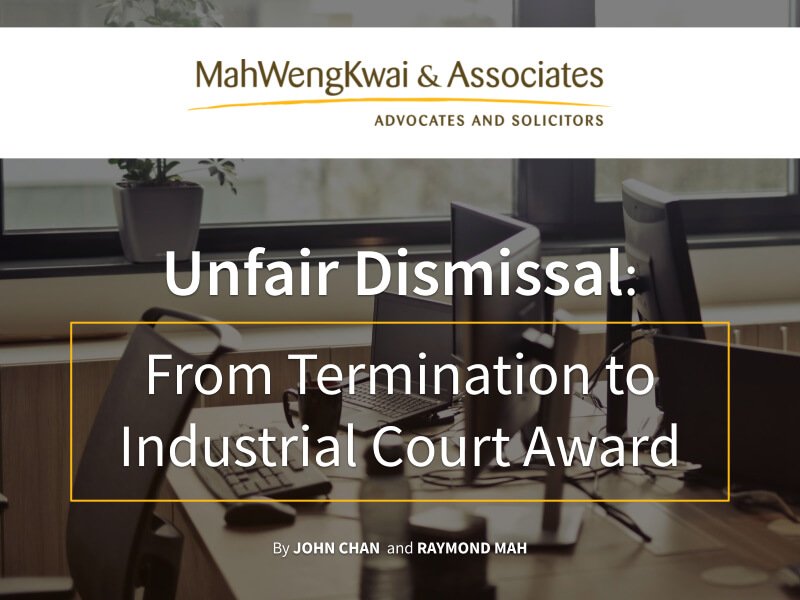 Malaysian employment law requires employers to have “just cause and excuse” before terminating their employees. The Courts have put employees security of tenure in employment on the same footing as that of ‘property right’. In Hong Leong Equipment Sdn. Bhd. v Liew Fook Chuan and Anor [1996] 1 MLJ 481 , Gopal Sri Ram JCA (as he then was) observed that:

“The legislature has willed that the relationship of employer and workman as resting on a mere consensual basis that is capable of termination by the employer at will with the meagre consequence of paying the hapless workman a paltry sum as damages should be altered in favour of the workman. It has accordingly provided for security of tenure and equated the right to be engaged in gainful employment to a proprietary right which may not be forfeited save, and except, for just cause or excuse”

However, it is still very common for employers to be ignorant and oblivious about this. Similarly, the majority of employees are not aware that they have been afforded such a “right” or “security” so to speak.

Below is an example of how an employee’s termination letter would normally read:

“Please be informed that the Company has decided to terminate your employment on the ground that you have committed a serious misconduct of making false claims amounting to RM10,000.

Pursuant to your employment contract, the Company hereby gives you two (2) months notice and your last day of work will be on 31st January 2018.”

The above example can be considered a prudent termination letter. This is because employers who are oblivious to the law may not provide any reasons whatsoever for terminating the employee on the presumption that compliance with the notice period stipulated in the employment contract alone is sufficient. This presumption is flawed and will be to the employers’ detriment.

Whether or not the employer provides a reason in the termination letter, an employee nevertheless has the right to seek relief under the Industrial Relations Act 1967.

Section 20 of the Industrial Relations Act 1967

Under Section 20 of the Industrial Relations Act 1967, an employee who feels that he has been unfairly dismissed without just cause or excuse by his employer, may lodge a representation to the Director General of Industrial Relations within 60 days from the date of his termination. By lodging this representation, the employee is seeking for reinstatement to his former employment with the employer.

Once the representation is lodged by the employee and received by the Industrial Relations Department(“IR Dept”), the IR Department will proceed to arrange one or two reconciliation sessions between the employee and employer to attempt an amicable settlement between the parties. An IR Dept officer will attend to the sessions and act as a mediator. Representation by solicitors is not permitted at this stage.

In the event parties achieve an amicable settlement, the matter ends there.

This current process, from the time the representation is lodged until the matter is referred to the Industrial Court, may take up to 6 months to 1 year.

In early June 2018, the new Human Resources Minister, M. Kulasegaran, told the press that the Minister’s power to consider and screen a case before referring it to the Industrial Court will be cancelled. This is to accelerate the disposal of unfair dismissal cases. He told Bernama in an interview: “I become a filtering process. I do not think that’s necessary. If anyone wants to refer to the Industrial Court, he must go straight (to court), not to the Minister”.

This is usually when parties appoint their respective solicitors to represent them at the Industrial Court. Form A – Application for permission to be represented by a legal practitioner and Form B – Warrant of Authority will be filed by the solicitors accordingly.

The second schedule of the Industrial Relations Act 1967 stipulates that the Industrial Court may only order back wages of up to 24 months only (12 months for probationers).

The hearing is conducted by way of a trial where the parties will call their respective witnesses to give evidence in support of their respective case. The Company will start its case and call its witnesses first (except in constructive dismissal cases) as it bears the burden of proof to prove that the dismissal of the Claimant was with just cause and excuse.

“Where representations are made and are referred to the Industrial Court for enquiry, it is the duty of that court to determine whether the termination or dismissal is with or without just cause or excuse. If the employer chooses to give a reason for the action taken by him, the duty of the Industrial Court will be to enquire whether that excuse or reason has or has not been made out. If it finds as a fact that it has not been proved, then the inevitable conclusion must be that the termination or dismissal was without just cause or excuse. ”

“It is a basic principle of industrial jurisprudence that in a dismissal case the employer must produce convincing evidence that the workman committed the offence or offences the workman is alleged to have committed for which he has been dismissed. The burden of proof lies on the employer to prove that he has just cause and excuse for taking the decision to impose the disciplinary measure of dismissal upon the employee. The just cause must be, either a misconduct, negligence or poor performance based on the facts of the case.”

“Firstly, there must be redundancy. Secondly, the dismissed workman must have been correctly selected for retrenchment. And thirdly, the employer should have adopted a fair procedure before carrying out the retrenchment. These form the three pillars upon which an employer sets the stage from which he puts forth an arguable case to justify the dismissal of a workman for the reason of redundancy. There is one common beam that connects these three pillars. That is, the unshakable proposition of law which imposes the burden upon the employer to prove the existence of these prerequisites and thus establish the correctness of the dismissal.”

After the Company has closed its case, the Claimant will proceed with calling his own witnesses, including being a witness himself. At the conclusion of the hearing, the Industrial Court will usually direct parties to file their respective written submissions.