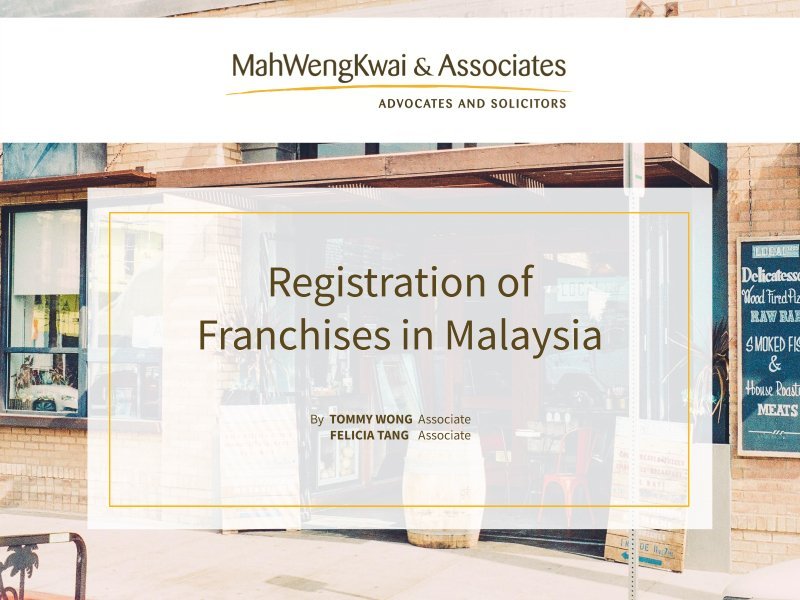 By Tommy Wong and Felicia Tang

Franchising is a form of strategy to expand and/or distribute businesses, whereby an owner of a business, product, name or service (“Franchisor”) grants affiliated dealers the right to sell, distribute and/or use such a business, product, name or service (“Franchisees”). In Malaysia, franchising is governed by the Franchise Act 1998 (“the FA 1998”) and its objective is to create a thorough registration system to regulate the franchise business in the country.

Pursuant to Section 4 of the FA 1998, “franchise” is defined as a contract or an agreement between two or more persons where the following takes place:

For the avoidance of doubt, each franchise term shall not be less than five (5) years, as set out under Section 25 of the FA 1998.

Section 4 of the FA 1998 also provides for the definition of a Franchisor and a Franchisee, which are as follows:

Application for the Registration of a Franchise

Registration of the Franchisor

Prior to the operation of a franchise or the making of an offer to grant a prospective Franchisee the right to operate a franchise, a Franchisor must make an application to register the said franchise with the Registrar. In Dr Premananthan a/l Vasuthevan v Permai Polyclinics Sdn Bhd [1], the High Court held that, if a franchise is not duly registered under Section 6 of the FA 1998, any franchise contract or agreement made under such circumstances will be in contravention of the said provision and thus illegal, ineffective and void.

In relation to foreign Franchisors, the High Court in Dr HK Fong Brainbuilder Pte Ltd v Sg-Maths Sdn Bhd & Ors[2] took the view that all franchises, both local and foreign, must be registered with the Registrar. Although the plaintiff in the said case contended that the registration of franchises under Section 6 of the FA 1998 was only applicable to local Franchisors, the High Court reasoned that, if a foreign Franchisor is not required to register its franchise with the Registrar, the foreign Franchisor may be able to avoid compliance with the mandatory provisions in the FA 1998 for the protection of Franchisees. This comes as an addition to the requirements under Section 54 of the FA 1998, which stipulates that a foreign person intending to sell a franchise in Malaysia or to any Malaysian citizen is required to submit an application to the Registrar.

It is important that the above requirement is satisfied prior to the commencement of operating a franchise business. Section 6(2) of the FA 1998 sets out the penalties for failure to register a franchise, which is an offence, and the Franchisor shall, on conviction, be liable to the following:

Where the Franchisor is a body corporate

Where the Franchisor is not a body corporate

Registration of a Franchisee

Registration of a Franchisee of a Foreign Franchisor

Application for Registration of the Franchise

In addition to the submission of the above, all of which are as prescribed by the FA 1998, the following documents are also required to be submitted by the applicant:

(all of the above documents shall collectively be referred to as the “Registration Documents”).

For the avoidance of doubt, all Registration Documents to be submitted to the Registrar must be certified true copies.

Contracting parties should ensure that franchise agreements or sub-franchising agreements are carefully drafted to cater to the needs of the parties who intend to open a franchise business.

By Tommy Wong and Felicia Tang