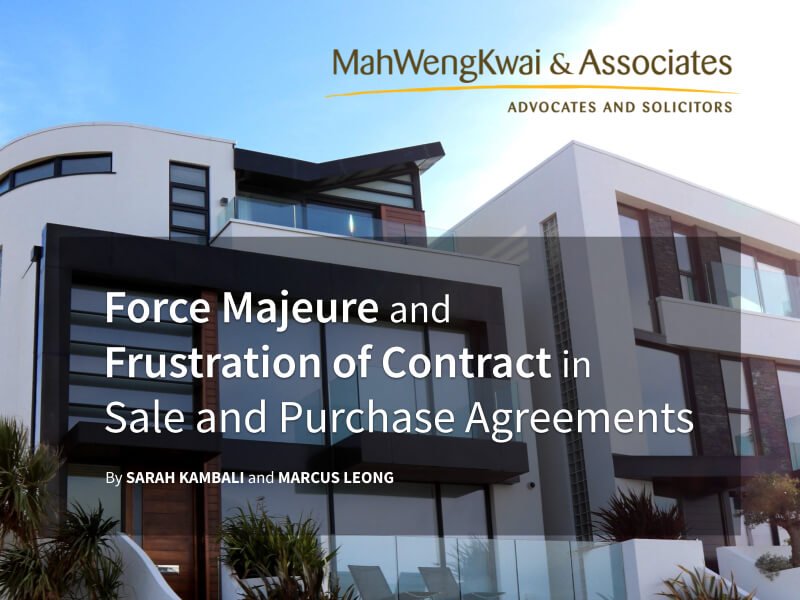 On 18 March 2020, the Movement Control Order (“MCO”) came into effect. Travel and movement restrictions were imposed to control the spread of the COVID-19 virus. MCO has inevitably made a significant impact on people’s lives and businesses. As such, uncertainties have arisen in commercial contracts and transactions. This article discusses force majeure provisions in Sale and Purchase Agreements (“SPA”) and the common law doctrine of frustration, and how both may be applied in the context of the COVID-19 pandemic and MCO.

A force majeure event refers to the occurrence of an event or circumstance which is outside the reasonable control of a party and/or could not have been foreseen at the time the contract was entered into, which prevents that party from performing its obligations under a contract. Unlike civil law jurisdictions where force majeure is governed by their respective civil codes (e.g. French Civil Code and UAE Civil Code), the operations of force majeure clauses in common law jurisdictions, including Malaysia, are dependent on the wording of the provision.

“Force majeure clauses are clauses generally intended to include risks beyond the reasonable contract of a party. In essence, it frees both parties from liability or obligation when an event such as war, riot or act of God such as an earthquake takes place.”An effective force majeure clause usually contains two main components:

(a) A description of what amounts to a force majeure event; and

(b) The consequences of a force majeure event.

1. Does the MCO or the COVID-19 Pandemic amount to a force majeure event in a SPA?

Assuming that there is a force majeure clause in the SPA, the applicability of a force majeure clause would depend on its wording and the facts of each case. If the wording of the clause is wide enough to cover the COVID-19 pandemic or MCO, then the party who is unable to perform his obligations of the contract due to COVID-19 or MCO may avoid liability . Clauses such as “pandemic outbreak”, “government impediment to continue transaction”, “change in the law that impedes the continuance of the transaction” are common phrases incorporated in force majeure clauses.

2. If performance of the contractual obligations under the SPA are not affected by MCO, would the force majeure clause be applicable?

3. Will time be extended for SPA due to the MCO?

Parties should not assume that the time frame for the completion period of the SPA will be extended automatically. This is highly dependent on the terms and conditions of the contract. Certain force majeure clauses may provide that a party shall not be liable to the other party for any loss, damages or delay whatsoever suffered by the other party due to any government action which is not attributable to the fault of the party, or any other cause which is not reasonably foreseeable by the party.

In the event there is no such force majeure clause, it is strictly a matter for the contracting parties to resolve and/or negotiate within the ambits of the contract.

4. What is the effect if the force majeure becomes applicable?

In addition, force majeure is not an automatic right and a force majeure cannot be implied into a contract. In the event that the contract does not expressly contain such a clause and the performance of the contract becomes impossible or unlawful, the affected party may rely on the doctrine of frustration.

The definition of doctrine of frustration in Malaysia can be derived from Section 57(2) of the Contracts Act 1950. It is defined as “A contract to do an act which, after the contract is made, becomes impossible, or by reason of some event which the promisor could not prevent, unlawful, becomes void when the act becomes impossible or unlawful.” The term frustration is not used but instead referred to as impossibility and unlawful event. As the word impossible is not defined,  the Courts look to common law principles to ascertain whether the doctrine of frustration is applicable.

In the case of Guan Aik Moh (KL) Sdn Bhd v Selangor Properties Bhd [2007] 4 MLJ 201, Gopal Sri Ram JCA stated that there are three elements in the doctrine of frustration:

(a) The event which has frustrated the contract must have been one for which no provision has been made in the contract;

(b) The event frustrating the contract must be one for which is not responsible by the parties. In other words, self-induced frustration is ineffective; and

(c) The event which is said to discharge the promise has to render it radically different from that which was undertaken by the contract.

“… frustration occurs whenever the law recognises that without default of either party a contractual obligation has become incapable of being performed because the circumstances in which performance is called for would render it a thing radically different from that which was undertaken by the contract.”1. What is the effect of the doctrine of frustration?

If the elements of frustration can be satisfied, the contract will be rendered void. In such circumstances, parties are no longer required to perform their contractual obligations.

It is unlikely that the MCO or COVID-19 outbreak will frustrate a SPA. If the contract can still be completed after the MCO and parties can still obtain what they have agreed in the contract, this will not render the contractual obligation radically different from that which was undertaken by the contract.

3. Does frustration arise if the obligations of the contract become more difficult to perform?

Frustration does not arise just because the act becomes difficult to perform. In the case of Pacific Forest Industries Sdn Bhd v Lin Wen-Chih [2009] 6 MLJ 293, it was held that a contract does not become frustrated merely because it becomes difficult to perform. If a party has no money to pay his debt, the contract is not frustrated because the party’s contractual obligation to make payment is not impossible to perform. Similarly, in a tenancy contract, if the tenant is unable to pay rental to the landlord merely due to financial difficulties, it will be insufficient to establish frustration.

Despite the existence of force majeure and the doctrine of frustration, there are uncertainties in relation to the performance of contractual obligations of contracts due to the extension(s) of the MCO. There is certainly a need for the government to introduce a COVID-19 Bill to obtain guidelines and temporary relief for parties who are unable to fulfil their contractual obligations under a SPA.

By Sarah Kambali and Marcus Leong